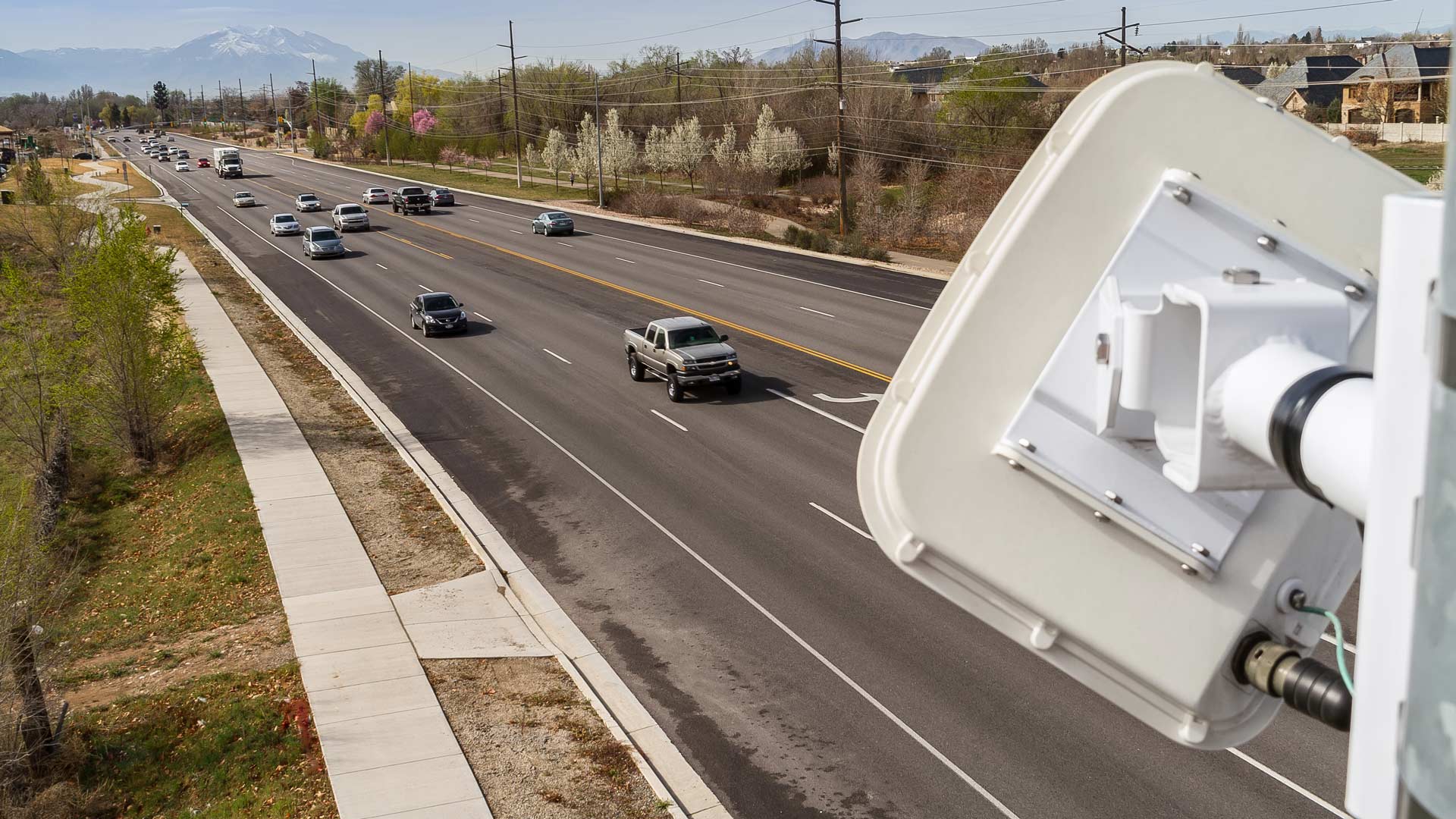 The technology behind SmartSensor Advance has proven to be one of the most effective tools for safer, more efficient intersections. Now agencies throughout the US are finding creative new ways to use Advance and its dynamic vehicle detections.

SmartSensor Advance provides traffic radar detection that is simple and cost-effective to deploy, and its non-intrusive design protects the integrity of roadways while keeping road workers out of harm’s way.  Like all SmartSensors, Advance was designed by Wavetronix engineers to increase both safety and traffic efficiency, but Advance is unique in its ability to continuously track individual vehicles and calculate their estimated time of arrival at the intersection. This allows Advance to dynamically adjust dilemma zone protection to the individual needs of each vehicle.

SmartSensor Advance’s unique capabilities are improving safety and efficiency at intersections throughout the United States.  Now traffic engineers are discovering new and creative ways to use Advance, and the effects on traffic are exciting.  This paper attempts to provide some insight into how SmartSensor Advance works, and the different applications being implemented by traffic professionals at various locations.

SmartSensor Advance emits a radar with a large vertical beam width and a narrow horizontal width. The wide vertical beam allows Advance to be mounted high in the air and still track both near and far vehicles at the same time. This is important because the higher the mounting height, the less likely it will be that near vehicles block or occlude vehicles that are farther away.  Advance transmits hundreds of radar pulses each second to detect the range and measure the speed of each vehicle it can see. Advance can detect vehicles from 600 to 900 feet in advance of the stop bar.

The result of that time calculation is the ETA upon which the Advance sensor bases its dilemma zone protection for individual vehicles.  In other words, the ETA in seconds is the vehicle’s distance from the stop bar divided by the vehicle’s speed. A vehicle’s speed in this equation is represented by feet per second, not miles per hour.

“ETA is continuously updated to determine if there are any vehicles within the broad span of ETAs that constitute the decision dilemma zone,” says Brad Giles, Wavetronix research office director.  “Continuously tracking the ETA helps protect each vehicle based upon its individual dilemma zone.  It is a dynamic system that adjusts for vehicles that are accelerating or decelerating – if there are vehicles in the dilemma zone, the sensor communicates to the controller to extend the green light if possible.”

One example of how SmartSensor Advance’s dynamic ETA tracking is being used to promote safer intersections comes from a project in Frisco, Texas, where a high school studentnamed Jeff Ding used Advance to tackle turn blindness, something that can be a common danger.

Jeff Ding says he has experienced turn blindness as a driver and decided for his senior engineering project he would try to comeup with a solution.

“I felt like this is a very clear problem in daily life that many people could relate to,” Ding says.

Turn blindness is a phenomenon that occurs when a left- or right-turning driver’s view of oncoming cross traffic is obstructed by other vehicles, obstacles or geographic features. This raises the risk of accidents for all drivers.  The danger at some intersections is so severe, the City of Frisco prohibits right turns on red simply because of obstructed visibility.

Ding decided to use technology to help drivers turning left across traffic, as well as drivers attempting to turn right on red into traffic. Working closely with the City of Frisco and Twincrest Technologies, the authorized Wavetronix channel partner in Texas, Ding selected a T-intersection where visibility is obstructed and mounted a SmartSensor Advance unit to detect oncoming traffic.

The sensor was connected to an existing red-light confirmation light, and when the sensor detected an oncoming vehicle, the detection would illuminate the confirmation light, signaling to drivers that it was not safe to turn. The testing was done without the driving public’s knowledge; the indicator setup was tested to see if it modeled what drivers were currently doing.

“We set up a zero- to six-second ETA threshold as well as a six-second extend for a conservative indication,” Ding says. “We tested this concept without informing the public, but it was extremely successful as the indication times closely followed driver behavior.”

Ding says the project, part of his Engineering Design and Development class, capped his four-year participation in the Project Lead the Way program offered by Frisco ISD. This program encourages students to use what they learn to invent or improve real world solutions.

“Our goal for the class from day one was to find a problem in the world that we could solve and to solve that problem by the end of the year with a prototype that we would build,” Ding says.

According to Ding, SmartSensor Advance was an important part of his project’s success. Successful testing needed to meet two specific conditions: first, the sensor had to detect all vehicles that passed through its detection zone; and second, the sensor had to successfully indicate a "not safe to turn" signal at the same time that drivers decided not to execute the turn.

“In our testing of this setup with SmartSensor Advance, both of these conditions have always been met,” Ding says. “I am excited for the implementation of this concept in the near future.”

“The theory is that drivers speed up to beat the red light when the warning flashers activate, which is why they are being removed,” says Tyrell Thompson, transportation engineer with ODOT’s District 5. “We have the data that shows there are severe crashes attributed to that type of [flashing warning] signing that’s out there.  “We felt we could move forward with a safer type of warning device with the static signs and the type of zone detection we wanted to put out there.”

ODOT’s system relies heavily on SmartSensor Advance’s ability to track individual vehicles and extend the green light when a vehicle is detected in a dilemma zone.  By understanding how Advance’s dynamic ETAs work, ODOT can activate non-flashing signs that warn of the upcoming intersection in order to make the intersection safer for all drivers.

In Idaho, high volumes of large truck traffic, short entrance ramps and limited visibility from point-of-entry (POE) station offices caused traffic to back up from stations onto the freeway, which led to safety concerns for truck drivers and the general driving public. To address these challenges the Idaho Transportation Department implemented a reliable vehicle detection system at the state’s numerous POE stations in order to improve traffic flow, reduce wait times and limit traffic queues.

ITD chose a system that can alert them when backups occur. The solution included the deployment of SmartSensor Advance units 500 feet in advance of station entrance ramps to monitor the speeds of vehicles exiting the freeway. The data collected by Advance is sent to Command Monitor and Translator data applications, which analyze the data.

POE personnel can be notified of the backup if conditions meet user-defined thresholds. Then, the POE sign can be turned off, effectively closing the station to additional traffic preventing other trucks from clogging the ramp and backing up onto the freeway. To make sure the system runs smoothly, ITD also uses video cameras to visually verify conditions.

As a result, the system has experienced fewer backups, so traffic on the freeway is not impeded; and POE stations operate more efficiently when not overwhelmed by traffic volumes.

There are many unique ways to use the technology of SmartSensor Advance to make intersections run more smoothly.  In the examples above, Advance was used to help drivers make safer left-hand turns, improve traffic flow at POE stations, and as a replacement for flashing warning signs. These are just a few demonstrations of the applications made possible by Advance’s technology.

Advance, like all SmartSensors, installs above the road, eliminating the need for expensive and intrusive installation. Some of the benefits of nonintrusive installation include the reduction of labor time, lane closures, trenching and specialized equipment. In addition, Advance will calculate the dynamic ETA for every single vehicle at the approach with just one sensor. Typically, a sensor can be installed with a couple of workers and a bucket truck in less than an hour if cable is already pulled.

If you would like to learn more about SmartSensor Advance, its unique capabilities or the ways that it can improve the safety and efficiency of your intersections, we invite you to contact Wavetronix or your local authorized Wavetronix representative.