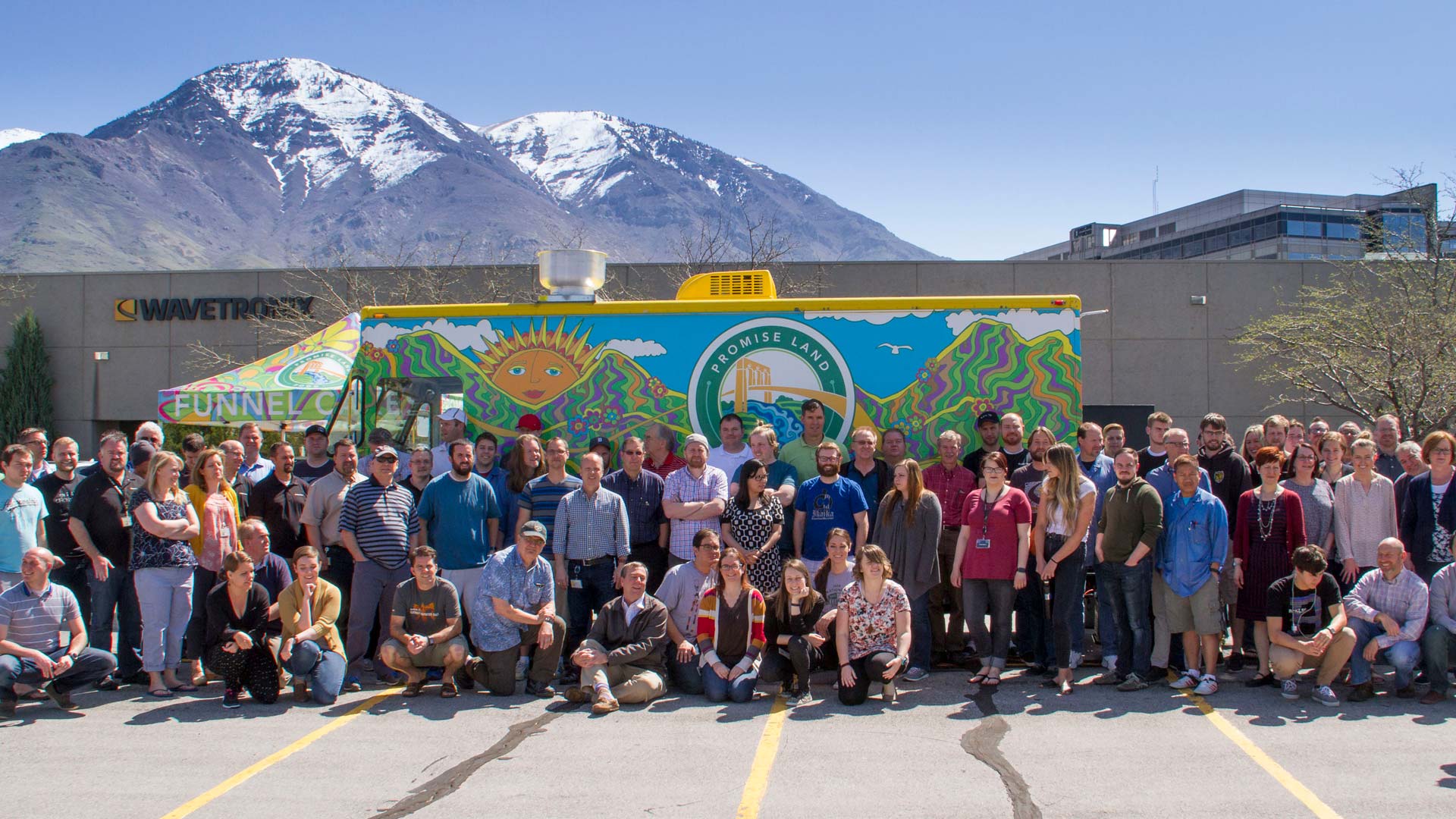 Wavetronix’ success is built on a culture of values. By putting people first, driving innovation and continuously growing, the company has created an environment that makes almost anything possible.

Take a moment and think back to what your life was like in the year 2000. Where were you living? What was your job back then? Who was in your family or circle of friends? What did you wear? What music did you listen to? What was your favorite movie?

The world has changed dramatically since 2000, from the prolific spread of smartphones to near universal acceptance of the Internet; from plasma to ultra-high definition television and on and on and on. When Wavetronix was founded in 2000, the traffic industry looked very different than it does today. Indeed, the last 18 years have been perhaps the most dynamic and exciting time in the industry since the invention of the automobile.

In 2000, the concept of intelligent transportation was in its infancy. Where ITS did exist, it relied on technology that was already old to get the vehicle data needed for intelligent systems – inductive loops.  Loops were considered cutting edge technology in the 1970s, and while they worked well at the time, their intrusive nature and susceptibility to failure were problematic.

Wavetronix came on the traffic scene in 2000 with innovative ideas that have helped transform the traffic industry into the highly-technical place it is today. Like the industry, Wavetronix has evolved from a small group of radar and traffic experts into the world-wide recognized leader in radar traffic technology.

The secret to Wavetronix’ success can be summed up in its core values – three concepts that act as guiding principles to the company and its members: people first; innovation driven; and growth mindset.

“As our customers make the decision to invest in Wavetronix, they are essentially investing in these core values,” says David Arnold, founder and CEO of Wavetronix.  “They become our partners in realizing these values, not only at Wavetronix but throughout the industry and wherever our technology is used to make roads safer and more efficient.”

The phrase “people are our most valuable resource” has become a business cliché, but what does it mean?  Often, it doesn’t mean much, but at Wavetronix it’s an idea that is taken very seriously.  The company’s “people first” mentality was a critical part of its founding.  According to Arnold, Wavetronix was formed to give people in technological fields a place to work in Utah.  As a professor in the engineering program at Brigham Young University, Arnold says he was tired of seeing so many of his talented students move out of state to find a rewarding career.

“At Wavetronix, the company was founded to create technology-based jobs, challenging jobs, for employees,” Arnold says.  “That’s why we founded the company.”

The workforce at Wavetronix has grown from a handful of Arnold’s engineering students at BYU to what it is today: hundreds of employees around the globe with rewarding, challenging careers.

Of course, the promise of a company’s founding can dilute over time, but the “people first” vision of Wavetronix continues to grow. One example of this growth is a comprehensive education program Wavetronix put in place.

Every employee at Wavetronix receives technical training, including in-depth classes on radar as well as the installation and configuration of our various sensors, but this is only the beginning. Wavetronix also has a dedicated education team devoted to teaching employees skills needed to run a business efficiently, improve business performance and improve relationships in all aspects of life.  Wavetronix offers an ever-growing mix of classes, curated and presented by educational experts.

“It’s basically free professional training,” says Lara Anderson, one of the instructors at Wavetronix. “It helps improve the lives of the employees. At the same time, it improves morale and productivity at work.”

Of course, the “people first” vision of Wavetronix is not limited just to employees.  “We take the relationships we’ve developed with our customers very seriously,” Arnold says.  “At Wavetronix, we aren’t just pursuing sales, we are pursuing relationships and partnerships.  We don’t just see agencies, we see people who are trying to make a difference, who sincerely want to make traffic better.  And why are they doing it?  Because in all of those vehicles on all of the roads all over the world, there are people who are relying on those agencies to get them safely to wherever they are going as efficiently as possible.  It’s a privilege for us to be contributing to that in our unique way.”

Creating unique and innovative solutions that solve customers’ problems has been a focus for Wavetronix from the beginning.  In fact, it was vital for the young company to stand apart from its competition by being unique and innovative.  Once the industry realized the downsides to using loops, the market was flooded with new, non-intrusive detection options, from video detection to early forms of radar.  These products came with promises about accuracy and reliability that, in the end, couldn’t be fulfilled.  The result was a lack of trust for non-intrusive detection in the industry.

Wavetronix decided to start from scratch and build a brand-new product from the ground up.  This process began with extensive research and an exhaustive effort to understand the detection needs of transportation agencies and the challenges they faced. The goal was not to simply fill a niche but to solve problems.

“Creating a product from scratch gave us the power to control the process,” says Thomas Karlinsey, director of engineering development at Wavetronix. “It was actually a lot of fun. We would spend hours, even days, dreaming up stuff we could do, and then we’d have to weed through what was actually feasible.”

This creative energy turned out products unlike anything seen before – a family of radar traffic sensors, each with innovative solutions for specific situations:

These innovative solutions helped bump Wavetronix past the suspicions that traffic professionals had with non-intrusive detection and put Wavetronix in its current position as the standard for radar traffic detection.

“We weren’t the first to market with radar but we’ve consistently been the first to introduce new innovations, new ideas and new ways to solve old problems,” says Mike Rose, chief business development officer at Wavetronix.

Even with top-notch people and innovative products, growing a business is a tricky thing. You can play it safe and stay small, but those companies tend to blink out of existence or get swallowed up by larger groups. On the other hand, you can expand too rapidly and end up burning yourself out.

Wavetronix’ stated goal to create good, challenging jobs necessitates growth but the growth is handled in a controlled, measured way. It was nearly a decade before Wavetronix started selling sensors outside the United States. Not because demand wasn’t there, but because it wanted to be sure it could meet all the expectations the Wavetronix name carries.

“We have competitors who have tried to flood the market with their products, but they’ve had a very difficult time supporting what they’ve sold,” Arnold says. “We have been very targeted in our approach, we’ve moved very slowly and methodically, and we have found this to be more effective than the shotgun approach.”

While this approach can seem slow, it is effective. The growth of Wavetronix is such that it’s pushing the boundaries of its current location. To help remedy this, Wavetronix has purchased 68 acres in Springville, Utah to be the location of the new global headquarters for the company.  With construction slated to begin in Spring of 2018, the new space will be a continually changing campus that intends to stay relevant for decades to come, by ensuring there are adequate resources to support and maintain the company’s three core values.

If one was to look at the entire timeline of Wavetronix, from its inception as a startup in 2000 to the present day; from its current status as the traffic detection standard to a future where the transportation industry, and the company itself, has transformed into something completely different, you will find a company that holds to its core values: putting people first, driving innovation and always growing.

“We’ve succeeded because we follow our process,” says Arnold. “Our employees are our greatest asset. They exhibit a spirit of quality, innovation and integrity that contributes to the company’s success. We follow a methodical process in our growth that is not opportunistic, but well planned and systemic. It’s built around people, products, and processes that work.”